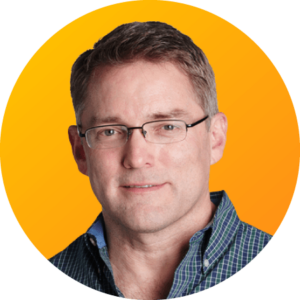 June is Pride Month, a time to celebrate and recognize the LGBTQIA+ community, the successes and achievements made by this community, and the continued fight for equality. The momentum behind Pride celebration dates back to June 28, 1969, when LBGTQ protesters stood up against a police raid at the Stonewall Inn in New York City. While not the first time members of the LBGTQ community took a stand against this type of injustice, the Stonewall riots sparked a revolution of sorts that has continued to evolve for decades — in the United States and worldwide. Pride today continues to be about taking a stand, and at its essence, giving everyone — including members of the LBGTQIA+ community, the right to live their life authentically and to be able to love unapologetically.

In celebration of Pride 2022, we wanted to shine a light on Ross Camp, Vice President of Corporate Communications at Cohesity. In this article, Ross shares his experiences coming out in the workplace, why Pride is truly a year-long celebration, and the importance of sharing his truth.

“When you deny yourself the opportunity to share your truth, it is not a healthy place to be. It’s telling yourself, ‘I’m not good enough’ and the fact of the matter is, you are, and then some!” 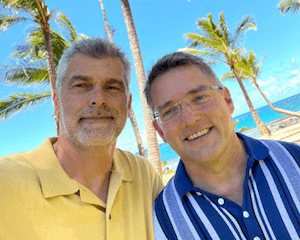 In 2004, Ross Camp put a photo of himself and his same-sex partner on his desk at work. It was the first time he had done so and he did it with excitement and anxiety — what would be the reaction from his co-workers? Could such a “routine” act have bad repercussions? He had already felt the sting of harsh words and judgment as a teenager. And, he later encountered biases in the workplace where comments were made to him by management that made it clear so-called “alternative lifestyles” would not be well-received.

So, when Ross decided to put that photo on his desk in ‘04, he didn’t know what to expect. Same-sex marriage was considered illegal in the U.S., and job discrimination was (and unfortunately, still is for many) a terrible reality that not only impacts the LBGTQIA+ community, but people of different races, ethnicities, and genders. The good news is that the photo actually sparked conversations with co-workers about life outside of work and created a meaningful dialogue that made him feel even more connected with the team.

For these reasons, Ross doesn’t take for granted working for a company like Cohesity that celebrates diversity, equity, and inclusion (DEI). It’s also not lost on him, or his partner Jeff, how significant it is just to feel comfortable walking down the street holding hands, taking each other to company events, being embraced by their families, and celebrating the joy that defines their relationship. Many don’t feel that level of comfort. In fact, recent studies have shown that nearly half of LGBTQ workers in the U.S. are closeted at the office — meaning they don’t feel safe “coming out” at work and choose to keep that part of themselves completely private.

Ross shares more about his experiences in this Q&A below.

You talked about some challenging experiences early on in your career and a fear that if you came out, there would be a price to pay. Years later, how has that influenced your current approach to leadership?

Ross: Where do I begin? It’s impacted me in so many ways. First off, I want to create an environment where people never have to think about hiding who they are — whom they love, their religious (or non-religious) beliefs, and what makes them tick as individuals and professionals. It’s also made me continue to look at myself: are there ways that I have consciously or unconsciously discriminated against others and how can I be more aware of that moving forward? And, third, it’s really about seeing co-workers as people, not just as transactional beings. It’s really important for people to know they matter and their opinions count.

Can you talk more about creating a safe space where everyone can bring their whole selves to work?

Ross: Fairly early in my career, I vividly remember standing in the office and hearing sentiments from company management that made it clear being gay was “not good.” Internally, I froze. What was I to do? As I’ve read the book Positive Intelligence, I now see that my judge saboteur that developed as a teenager went into high gear. It told me I would never be accepted for who I actually was. My wish would be that no one has to experience that paralyzing feeling again. The sad part is I know many will, but I can make sure no one under my watch will go through anything like that. Ever.

For me, our RADIO values take on new meaning when I think about the notion of “Respect.” I’m also glad to see Cohesity talking about DEI in a meaningful way. It matters. I would hope that by having these conversations, others will feel safe and proud to bring their authentic selves to work. That’s so important as we continue to build a culture that not only defines who we are now, but who we will be in 1, 5, or 10 years.

Many Pride celebrations take place in June in the U.S. How do you view Pride?

Ross: I grew up in Louisiana. While I love my home state (best food in the nation, in my opinion), I was brought to tears the first time I went to a Pride celebration in San Francisco more than 20 years ago. I had never seen such a massive event celebrating the LGBTQIA+ community. It is so enlightening to see all walks of life coming together to support a segment of the population that I believe should have the rights and privileges that are afforded to others. But, I now realize Pride is something that needs to be celebrated 12 months out of the year. And, that’s what I try to do.

The rights of the LGBTQIA+ community have come a long way in the U.S. and other countries. What are your hopes for the next decade?

Ross: I hope it becomes a standard business practice that the majority of companies have a culture of inclusivity. What we may see as the norm in the Bay Area and Silicon Valley is not the experience many people have in other states and countries. It would also be nice to stop worrying that the basic rights recently granted to the LGBTQIA+ community, including things like same-sex marriage, are secure from being reversed. I hope that these rights are expanded to prevent all forms of discrimination and unequal access to jobs, housing, healthcare, etc.

Internationally, I hope there is much more of a global spotlight on this issue. In some nations, just being “outed” can lead to public shaming, humiliation, and worse, death.

Small steps should not be discounted. 20 years ago, the likelihood this type of article would ever be published broadly and shared via corporate social media handles was slim. This is another reason I’m proud to call myself a Cohesian and a proud member of the LBGTQIA+ community.

Want to learn more about Life at Cohesity and our RADIO Values?
Read more from our employees here. Want to join us? We're hiring!

Find a role that’s right for you