As I tap out these words, another chunk of data is being generated, and most likely stored multiple times in a dizzying array of completely fragmented secondary data silos that plague enterprises today. An estimated 80% of company data is strewn across a mass-distributed and disconnected matrix of data islands, much of it duplicate copies and nearly all of it dark – meaning there is little visibility into what it is or where it lives.

As you will see from our global survey, the problem of this mass data fragmentation isn’t just conjecture. It is a very real concern for IT departments around the world, and nearly all are grappling with not only how to manage this complex web of silos, but to then do what most enterprises are dying to do — glean valuable insights from all that data. Finding out how mass data fragmentation came to be, how it negatively impacts business, and what can be done about it is essential.

We will address these three questions – and provide direct responses from IT professionals illustrating the mass data fragmentation challenge – in this three-part blog series.

What is Mass Data Fragmentation?

Mass data fragmentation refers to the huge and growing proliferation of secondary data across a myriad of different locations, infrastructure silos, and management systems. By secondary data, we mean non-mission critical data that has low service level agreements, comprises the vast majority of an organization’s data, and includes things like backups, archives, file shares, object stores, test and development systems, and analytics.

Exploding data volumes and siloed, point-products have made it nearly impossible for organizations to protect or locate – let alone manage or exploit – their most important digital asset. Mass data fragmentation has become a headache for IT, largely due to lack of innovation by vendors that perpetuates an outdated, and ultimately unsustainable, approach.

So, although data has become recognized as one of the most valuable resources in the digital business era – it has also become one of the biggest barriers to digital transformation. 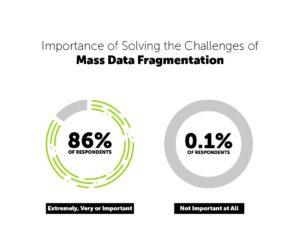 As a result, instead of treating data as a competitive asset, most organizations view it as a costly storage bill, a complex management problem, a growing compliance exposure, and even a risk to morale in IT.

Survey of IT Departments on Mass Data Fragmentation

Our recent global market study into this critical concern – Mass Data Fragmentation: The Barrier to Competing as a Data-centric Organization – underscores how mass data fragmentation is truly impacting enterprises – and IT teams within these organizations — on a global scale. We delve into this to some degree in a press release that went out today. But here are the key takeaways: