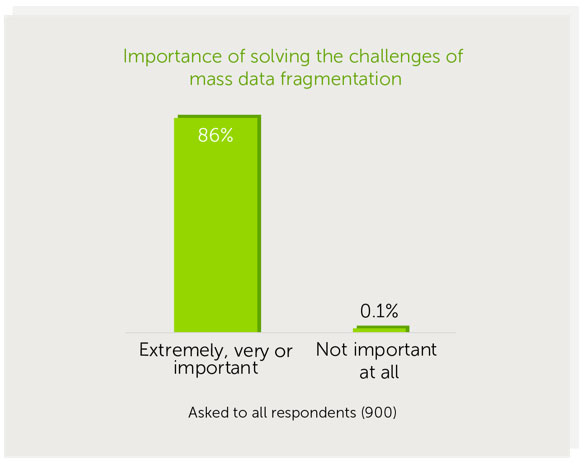 San Jose, Calif. – Nov. 14, 2018 – Cohesity, the leader of hyperconverged secondary storage, today announced the results of a global survey that validates a critical problem plaguing enterprises around the world: mass data fragmentation. The survey of more than 900 senior IT decision makers revealed that 87 percent believe their organization’s secondary data is fragmented across silos and is, or will become, nearly impossible to manage long-term, which could have devastating consequences. Respondents cited growing fears around competitive threats, compliance risks, job losses, sinking morale, and missed opportunities to increase revenue by as much as 10 percent.

Mass data fragmentation refers to the growing proliferation of data spread across a myriad of different locations, infrastructure silos, and management systems that prevents organizations from fully utilizing its value. The survey, commissioned by Cohesity and conducted by Vanson Bourne, found that 86 percent of decision makers believe it’s important, very important, or extremely important to solve the challenges of mass data fragmentation. Respondents are employed by enterprises in the United States, United Kingdom, France, Germany, Australia, and Japan, across a variety of industries including financial services, healthcare, life sciences, media and entertainment, technology, and the public sector. The companies represented in the survey had average revenues of $10.5 billion.

“IT leaders globally are wrestling with mass data fragmentation and the snowball effect caused by this critical infrastructure challenge,” said Mohit Aron, CEO and founder of Cohesity. “Data silos create compute and management silos, and it becomes nearly impossible for organizations to solve this constantly growing problem. Data becomes a burden when it really should serve as a competitive asset.”

Mass data fragmentation has the potential to wreak havoc on IT teams and budgets that are already spread thin. The overwhelming majority of respondents believe it will take their IT teams more time to manage secondary apps and data – on average 31 percent more time, or an additional 16 weeks each year – if proper tools aren’t in place. And for those who believe their organization’s secondary data is fragmented, more than half fear they will exceed their IT budget due to spending on unnecessary storage.

Employee well-being:
If IT is expected to manage all of the organization’s secondary data and apps without proper technology: 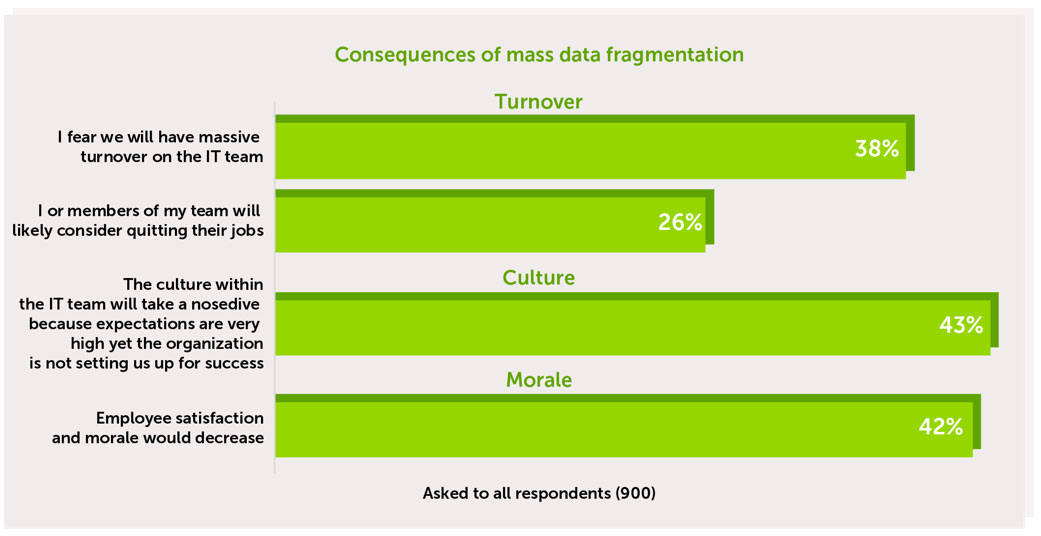 Solving Mass Data Fragmentation Unlocks Significant Rewards
Ninety-one percent of senior IT decision makers said that if half of the IT resources their organization spends managing secondary data were redeployed to more business-critical IT actions, it could have a positive impact on the company’s revenues over a five-year period.

About Cohesity
Cohesity makes your data work for you by consolidating secondary storage silos onto a hyperconverged, web-scale data platform that spans both private and public clouds. Enterprise customers begin by radically streamlining their backup and data protection, then converge file and object services, test/dev instances, and analytic functions to provide a global data store. Cohesity counts many Global 1000 companies and federal agencies among its rapidly growing customer base and was named to Forbes’ “Next Billion-Dollar Startups 2017,” LinkedIn’s “Startups: The 50 Industry Disruptors You Need to Know Now,” and CRN’s “2017 Emerging Vendors in Storage” lists. For more information, visit our website www.cohesity.com and blog https://cohesity.com/blogs/, follow us on Twitter https://twitter.com/cohesity and LinkedIn https://www.linkedin.com/company/3750699/ and like us on Facebook https://www.facebook.com/cohesity/.

Cohesity Research Highlights a Gap That Puts Businesses and Security Postures at Risk — a Lack of...

Cohesity Is Once Again Named a Leader in the 2021 Gartner® Magic Quadrant™ for Enterprise Backup and...