Since deploying Cohesity, the Giants have seen significant time and cost savings across the IT organization by implementing a cloud-integrated backup solution.

The Giant’s replicated their data to an off-site co-location facility causing issues with speed and data recovery. It was clear their legacy solution would not accommodate their significant influx of data.

The Giants organization has seen a 50% reduction in overall backup windows, as well as a cost savings of more than $15K per year from elimination of co-location and reduced maintenance and service costs. 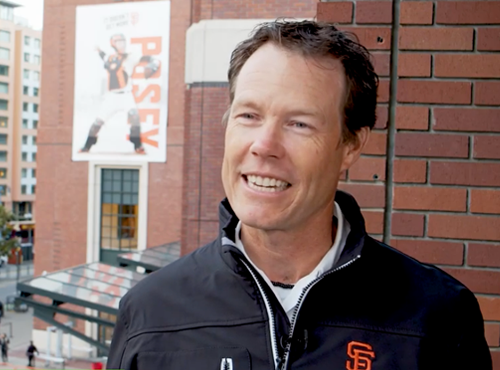 Since opening its gates, AT&T Park has become internationally-renowned as a premier venue in the world of both sports and entertainment. On the diamond, more than 56 million spectators have witnessed a number of magical moments, including three World Series Championships (2010, 2012, and 2014), the raising of four National League Pennants, and seven playoff appearances.

With offices alongside the San Francisco Bay, David Woolley, Senior Director, Network Operations assures us working for the San Francisco Giants is just like any other IT department, but since we know he’s responsible for backing up Barry Bonds’ home run video footage, we’re not quite convinced.

With a 20-year tenure for the franchise, Dave and his team have seen big shifts in technology, including the emergence of virtualization, mobile, and big data, which have all affected the amount of data the organization stores and maintains. Several years ago the IT team moved to Pure Storage for virtualization storage with EMC Isilon for file storage, managing about 125T of data at the time, including video, publications, photos, and archives. Greater use of technology on the field with multiple camera angles, statistics trackers, and other capabilities meant a significant influx of big data and a much more complex storage infrastructure. “Now we not only receive files with video and stats from our own major and minor league operations, but also additional files from MLB. This has caused multifold data growth every year, and since this information is used to make franchise decisions and affects if we win on the field, the ability to easily access data quickly at any moment was imperative,” explains Woolley.

At the time, the Giants were using Veeam and Symantec Backup Exec to back up to a Data Domain appliance which replicated to an off-site co-location facility, but it was clear this solution would not accommodate their exponentially expanding secondary data needs.
The Giants worked with system integrator Groupware Technology, Inc. to identify a single solution provider to meet the following requirements for a cloud-integrated backup solution:

After a successful POC, the SF Giants chose Cohesity for a complete backup and recovery solution. Since the organization was entrusting the core of its business and baseball data to a new virtualized environment, it was key that Cohesity demonstrate they are a trusted partner.
The Giants deployed Cohesity DataPlatform and Cohesity DataProtect with C2300 hyperconverged nodes for an optimal and cutting-edge solution. While the baseball organization is still refining its path to the cloud, it has been able to take advantage of Cohesity’s integration with cloud providers, including use of Amazon Glacier for a long-term solution to minimize data storage costs and to easily archive to cold storage.

In addition, the IT team will soon leverage Cohesity’s SQL clone and copy attach feature for simplified test/dev operations. This was a huge selling point for the Giants to enable the baseball side of the house to easily reference database snapshots for maximized troubleshooting and analysis. Cohesity is able to not only protect the SQL databases via native APIs, but can allow full cloning of a database to any SQL server or instance using the same APIs, all within the Cohesity interface. The app/dev team in particular is eager to implement this feature in order to spin up and directly attach to their data snapshots.

The core of our business isn’t backing up data, it’s managing the data so we are poised to be as competitive as possible when our club steps out on the field. Data is crucial to our business and our future, and our IT team strives to give our baseball staff the upper edge. Cohesity has allowed us to simplify and transform our secondary data environment, protecting more than 350T of data, leveraging the cloud and saving costs while moving away from legacy infrastructure. At the end of the day, we trust Cohesity to protect our most valuable data assets.

Since shifting to a cloud-integrated backup environment, the SF Giants organization emphasizes the importance of working with a simple solution like Cohesity. Where they had issues with speed and data recovery before, the IT team can now focus on strategic operations and has eliminated archiving headaches.

The remote co-location facility is no longer needed, saving the franchise significant cost. With the ability to migrate data to cloud or cold storage, the Giants can take advantage of a streamlined backup process, as well as save additional expense. In addition, the entire production environment can easily be replicated without additional cost of a duplicate system.
The SF Giants attained many benefits with Cohesity including:

Eliminate data silos and do more with your data on a single web-scale platform.

Transform idle backups into live Dev/Test data. Do away with the silos, complexity, and overhead.

Get peace of mind with fast and cost-effective data protection for your RDBMS.

Cohesity works seamlessly with the widest variety of enterprise IT environments so you can do more with your data.