It is sometimes easy to forget how much impact the smartphone has had on our lives. Until just a few years ago, we would not have had at our fingertips real time social updates, personalized music suggestions, driving directions, the ability to capture a photo moment, request a car ride or pay without cash or cards. In developing countries, the change has been even more dramatic; people can now obtain loans and start small businesses, access remote medical advice, improve education for their children, and much more.

However, it’s important to distinguish between the smartphone device and the smartphone as a platform. The smartphone platform is much more than a good-looking piece of hardware. All the key contributions listed above came from its ability to run software that extended the handset’s functionality in new ways and increased its value dramatically. The platform added an operating system (such as iOS in the iPhone) that manages all resources as shared, software-defined services – essentially removing the need for separate devices – and allowed new functionality to be added and used immediately with little or no training.

This was the insight that inspired my vision to transform secondary data infrastructure, and to start Cohesity. I saw that many of the innovative design principles brought about by the smartphone could be applied to a serious and widespread IT problem that was inhibiting many organizations from being as effective as they could be. We coined the term mass data fragmentation to describe it – the vast and growing sprawl of secondary data that has become scattered across different locations, trapped in infrastructure silos, and buried unseen in long forgotten storage systems, making it almost impossible for IT to manage – still less utilize the data for business advantage.

It is not uncommon for legacy infrastructure to contain 10 to 15 separate components, each with a separate UI and an inability to share data with each other. This leads to poor resource utilization and adds extra management burden to already overstretched staff. In addition, demands for access to data from test/dev and analytics teams are creating further single-use copies, while file and object storage is growing rapidly in its own silos, and public clouds are becoming fresh repositories for disconnected data islands. It is not surprising that in a recent global survey we commissioned, nearly ninety percent of the organizations interviewed said that their secondary data is, or will become, nearly impossible to manage in the long term.

So how do we solve this insidious problem? By adapting four key innovations brought about by the smartphone to this enterprise IT problem, integrated into a single solution.

As alluded to above, the first innovation was the consolidation of multiple separate devices (for example a phone, camera, calculator, GPS and flashlight) into a single device that could replace them all in one convenient form factor. In the same way, at Cohesity we built a single software-defined platform that supports all secondary workloads, replacing the need for separate dedicated infrastructure. Most organizations start with backup, and then extend to file and object shares, test/dev or analytics, vastly simplifying their operations and lowering cost with minimal disruption.

In this way, the Cohesity DataPlatform eliminates mass data fragmentation by making all data and services available as a shared resource under global control, applying granular deduplication to remove redundancy, and allowing users to transparently use cloud and data center environments as desired for best effect. The efficiency gains alone are enormous, with some of our customers reporting 10:1 or better data footprint reduction.

The second innovation the smartphone introduced was a single user interface and behavior model to manage all interactions. In the same way, we designed our solution to be controllable through a single intuitive GUI for all functions globally, significantly simplifying management by replacing multiple specialist consoles. Helios, our SaaS-based management solution, provides a single global dashboard for all locations whether on-premises or in the public cloud, where policies can be applied with a single click. 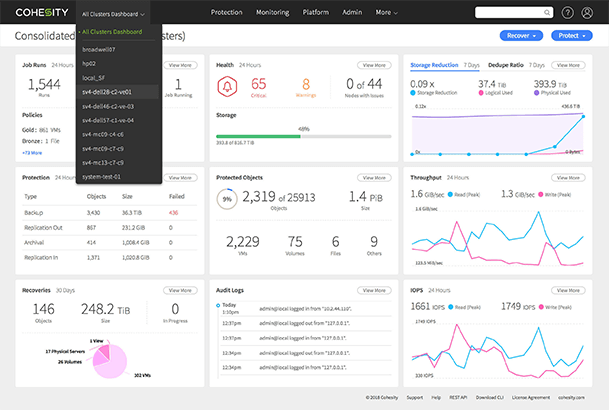 A third innovation that the smartphone implemented was the integration of machine learning (ML) to automate repetitive tasks and provide helpful suggestions, such as with auto-completion of text fields, face recognition and tagging. Similarly, we built machine learning into the Cohesity platform to empower administrators with proactive operational insights, recommended actions, what-if analyses and health checks that would otherwise require additional manual effort.

These three innovations have been available in our solution for some time, but there was always a fourth key element that was needed to truly complete the vision. Today I am delighted to announce that we have delivered on that plan.

The fourth key innovation popularized with the smartphone was the concept of an App Store, where users could download third party apps to enable a myriad of new capabilities on their devices. Today we are making this capability available uniquely on our platform – an industry first. Now for the first time, customers will be able to download apps from the Cohesity MarketPlaceTM and run them directly on the Cohesity DataPlatform, extending its functionality in valuable new ways. 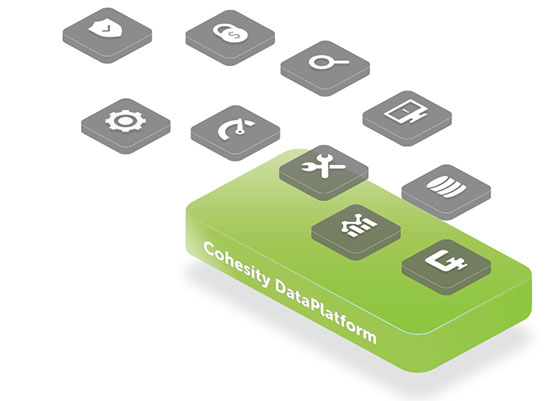 Imagine apps that can shine a light on ‘dark’ data, uncover new insights and offer new capabilities such as e-discovery, compliance, data loss prevention or analytics – and many more as the ecosystem grows. Until now these additional capabilities have been time consuming and expensive to implement, since they typically require separate infrastructure to be set up, and the source data extracted or moved into that environment for the app to run against. But now with the Cohesity platform, the process is as simple as downloading and installing an app, which can immediately run against any aspect of the organization’s data, having been previously captured and indexed during routine backup operations.

This breakthrough ability is based on a tenet of hyperconvergence that enables compute to be brought to the data, rather than moving the data to compute resources. Whole new levels of efficiency can now be achieved, since all data becomes ‘local’ and fully searchable, and does not need to be moved physically to another silo for the app to run. Customers can quickly and easily customize their environment in the same way that we personalize our smartphones today – for example, to apply new searches or custom functions to their data, check for compliance or security anomalies or export data to analytics suites.

It has often been said that data is the ‘new oil’ and a business’s most valuable asset in the digital age. However, for many organizations dealing with mass data fragmentation, data has resulted in costly storage overheads, complex processes for protection, difficulty of movement or provisioning, and increased exposure to security and compliance risks. We designed our platform from the outset specifically to resolve this dilemma, by applying the lessons of the smartphone to a hyperconverged platform that brings together compute and storage, eliminates silos, and can be managed through a single UI. As a result, IT is not only able to finally get in control of its data, it can now exploit that data to drive new business value at the same time, within a single solution..

So far, Cohesity has empowered almost a thousand enterprises and federal agencies to replace decades of complex, siloed infrastructure, and to open the door to new levels of productivity and innovation. I am pleased to have helped make our vision a reality for them, and hope you will be inspired to take a look for yourselves at the possibilities for your own organization.

Mohit Aron has more than 15 years of experience building scalable, high-performance distributed systems, and has been attributed as the father of hyperconvergence. Aron founded his current company, Cohesity, in 2013 and co-founded Nutanix in 2009.

See All Authors
Founder and Chief Technology and Product Officer

Mohit Aron has more than 15 years of experience building scalable, high-performance distributed systems, and has been attributed as the father of hyperconvergence. Aron founded his current company, Cohesity, in 2013 and co-founded Nutanix in 2009.