Despite what you may have heard here, our time at VMworld 2016 wasn’t all fun and Plinko – Cohesity also came to do some research on the current state of data storage. This research took the form of a floor survey and video interviews of nearly 150 conference attendees on different aspects of the data storage landscape. Of course, it’s a central theme at VMware’s largest annual conference, and we were eager to hear what the community had to say about some of the topics we care about most. It turns out we have a lot in common when it comes to data storage pain points and problems, as well as the types of new solutions we’re most excited about. 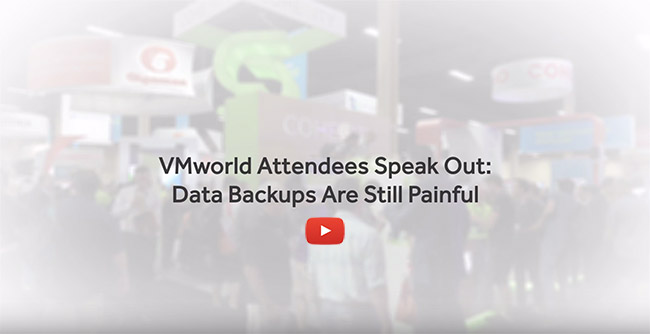 When we asked people to rank their greatest pain points in managing backups for virtualized environments, it was no surprise that costs and performance/scalability were the top challenges. Enterprises have been forced to contend with a fragmented array of backup solutions that require purchasing from several different hardware and software vendors to meet their basic archiving and disaster recovery needs. In fact, our survey showed that 51% of respondents were leveraging multiple vendors for their backups. Of course, buying from all these different vendors is expensive, and the complexity makes it difficult to scale as you grow. That’s the main reason why we designed Cohesity to function as a single hyperconverged platform covering every backup workload: it doesn’t have to be so complicated.

We were also somewhat shocked to hear about the typical restore times that VMware attendees experience. Nearly half of the survey respondents said their restore times typically came in at about one hour, while 28 percent commonly face restore times of four hours or longer. With Cohesity, VMware users can achieve instantaneous RTOs by simply creating a clone of the backup VM and running the VM directly from the Cohesity platform. Cohesity also supports granular VM, file and object-level recovery, with instant file-level search to accelerate recovery times.

The principles of hyperconvergence are at the heart of Cohesity’s solution, so we were eager to check the pulse of the hyperconvergence movement at VMworld 2016. Our survey revealed that the majority of attendees are already implementing hyperconverged architecture. VMware was responsible for two of the three most popular solutions, VSAN and vBlock (which is not a huge surprise given the people we were talking to), but it was interesting to see that Nutanix took second place as the most-used hyperconverged primary storage solution. Only about a third of survey respondents said they were not implementing any hyperconverged storage architecture.

Cloud technologies provide a number of benefits, including flexibility, faster recovery and reduced costs. Nearly 60 percent of respondents stated they plan to incorporate cloud into their storage infrastructure, with test/dev, disaster recovery and archiving cited as popular use cases. These findings show a vast majority of enterprises are embracing the cloud, and are more likely to include hybrid infrastructures that combine on-premise and cloud storage.

The buzz around cloud computing has continued to grow over the past few years, and the data storage industry has taken note of its numerous benefits, including flexibility, faster recovery and reduced costs. Nearly 60 percent of respondents stated they leverage cloud infrastructure for various data workloads, with test/dev, disaster recovery and archiving cited as the most popular use cases. As the hyperconvergence movement continues to pick up momentum, and people adopt new approaches to data infrastructure, there will be even more openings for companies to take advantage of cloud storage. Cohesity’s unified secondary storage platform was designed to integrate directly with cloud storage providers, so when enterprises are ready to move their data to the cloud, they have a simple path.

Net-net, the pain with backups still strongly exists for VMware, and people are searching for a better solution to simplify their VMware data protection. Meet Cohesity. The VMware community is all ears.

Backup as a Service to Simplify Oracle Database Protection