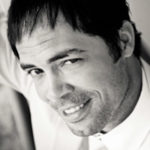 Today’s enterprises are storing roughly double the amount of data every two years from before. They are using it for a variety of workloads such as development and testing, file shares, analytics, backup, cloud archival, etc. Enterprise data tends to get siloed into multiple storage products, which stores the data as multiple copies, replicated and uncompressed.

These redundancies, referred to as copy data, can easily be 10-20x more than the actual capacity needed. Providing that amount of storage requires large investments – not just on the storage side, but in the overall IT infrastructure, such as networking, archival, cloud bandwidth, manageability etc. Thus, there are significant cost advantages in reducing the data footprint.

Given Gartner’s prediction of 800% growth in enterprise data within the next five years, storage space efficiency capabilities, such as deduplication, are critical to any enterprise storage platform. A recent IDC survey suggests that 60% of the enterprise storage is used for copy data! This copy data sprawl is driven by the lack of a single system to consolidate secondary data. Copy data management is needed to reduce data duplication.To deal with the expected data growth, enterprises need storage products capable of delivering the highest level of space efficiency and capabilities — with optimal cost.

What is Data Deduplication

Deduplication is one of the key storage technologies enterprises rely on to deliver optimal storage efficiency and reduced infrastructure costs. Deduplication is one of the most valued storage technologies in enterprise storage products because it’s designed to eliminate the need to store multiple copies of identical files. This reduces the amount of storage capacity required to store any given amount of data. Deduplication is a space efficiency feature that can be found in many enterprise storage products. However, because of a lack of standards, the effectiveness of data reduction ratios and cost savings are difficult to quantify when comparing different vendors. There is simply not always an apples-to-apples comparison.

This is mainly because vendors may use different types of implementations and individual techniques that will produce different results. I think it’s safe to say that, now more than ever, having deduplication as one of the capabilities in a storage product has become more than just another checkbox. It’s crucial for enterprises to be educated about a product’s implementation details in order to understand the advertised deduplication ratios and cost savings.

Deduplication is the technology where duplicate blocks of data present in multiple files are identified and only the unique blocks are stored. This task relies on having a metadata database that stores fingerprints of the unique blocks, then used for comparisons when finding duplicates.

The deduplication task becomes quickly non-trivial when systems become large and complex. The metadata alone could go into terabytes, and hence can’t be handled by a single node. Also, it taxes the system resources as incoming data has to be parsed and compared with all the existing blocks.

The value of deduplication is measured in a couple of ways:

Certain deduplication traits can determine the level of data reduction efficiency and overall value based on the implementation details.

This dedupe algorithm divides data into fixed-size chunks. Once the blocks are compared, only the unique blocks are stored. When compared to the alternative, fixed-length is far less efficient, but easier to implement.

This dedupe algorithm uses advanced context-aware anchor points to divide data into blocks based on the characteristics of the data itself and not on a fixed size. With fixed-length dedupe, small offsets in the data set can result in significant loss of space savings.

This approach limits data deduplication to just within a single node. There is no visibility to other nodes within the environment, where duplicate data will be found.

Node level deduplication only maintains a single copy of block D; D2 is a pointer to D1. No dedupe is achieved for blocks A & B.

This approach is the most effective process for data reduction and increases the dedupe ratio which helps to reduce the required capacity to store data. When a piece of data is written on one node, immediately after the write is acknowledged on node1, if the same data is written onto multiple additional nodes, the implementation is able to identify that data has already been written and will not write it again.

Cluster level deduplication only maintains a single copy of blocks A, B & D. A2, B2 & D2 are just pointers to A1, B1 & D1. This results in greater efficiencies in terms of utilization.

Compression works well on a single file, but across files, there is a need for some macro-level data compression. For example, when two identical copies of a file are stored, compression can individually compress the files. On the other hand, deduplication can completely eliminate the need to store any data for the second copy.

Adding compression to the deduped data you further reduce the data size. This works by finding small byte patterns common between the deduplicated blocks. Based on the type of data being ingested, compression can give no benefit for encrypted or random data, or up to 5-10x compression for common log files. Deduplication ratios for VMs, databases, file shares all lie somewhere in between that range.

How We Can Help

Our storage platform was designed from the ground up to provide a powerful and flexible global deduplication architecture. Cohesity utilizes a unique, variable-length data deduplication technology that spans an entire cluster, resulting in significant savings across the entire storage footprint.

Cohesity’s global deduplication across all nodes in a cluster results in less storage consumed, compared with just node level deduplication used in several other backup and recovery solutions. 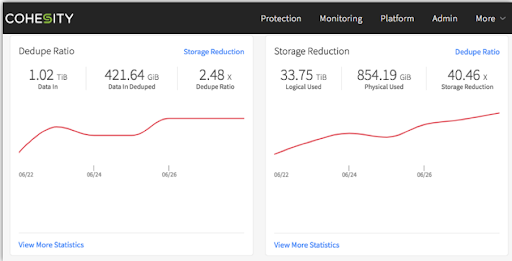 Deduplication is performed using a unique, variable-length data deduplication technology that spans an entire cluster, resulting in significant savings across a customer’s entire storage footprint. The figure below presents a logical illustration of the logic and functions performed as part of Cohesity’s global deduplication implementation. 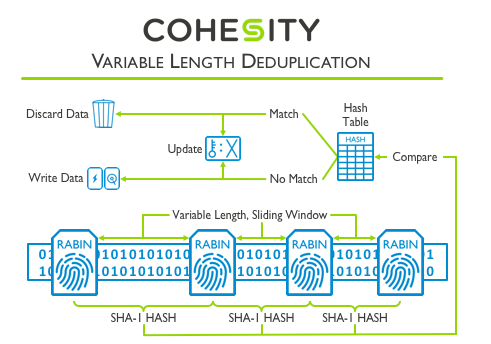 With this implementation, the dedupe algorithm inserts markers at variable intervals in order to maximize the ability to match data, regardless of the file system block size approach being used.

For future updates about Hyperconverged Secondary Storage, Cloud Computing, Networking, Storage, and anything in our wonderful world of technology be sure to follow me on Twitter: @PunchingClouds

Growth of data is soaring. Recovery times are critical. Legacy backup systems can no longer keep up. Here’s a checklist for evaluating a modern solution.

Data Management for Outposts with Cohesity

Enterprises like the flexibility and scalability of the AWS cloud because they can quickly deploy 100’s of VMs, multiple databases, kubernetes, and other services in a matter of minutes in…